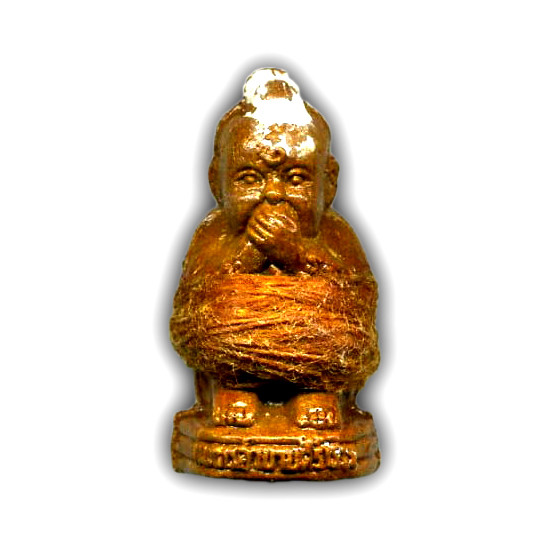 It is said that this particular batch of Guman Thong from Luang Pu Goy was made in the ancient method as has been practiced by Khun Phaen – the maker of the first Guman Thong in ancient Thailand – but at the same time the traditional Cambodian methods of the Wicha of Guman Thong have been used in making this batch.  Luang Pu Goy received his instructions in this Cambodian Wicha from LP Chen Wat Taree, who uses Nam Man Prai as an ingredient of Guman Thong amulets/statues.

Other ingredients used in the making of this particular Guman Thong are:
- Ash remains of 9 cremated baby bodies (who died on Saturdays as unborn babies whilst still inside the mother’s womb, and were cremated on Tuesdays)
- Earth taken from 7 different graveyards
- Earth taken from 7 different salt licks
- Pieces of sacred Takian wood
- Pieces of special Guman Thong herbs

Then, the mixture of these sacred ingredients underwent a ritual ceremony in order to invite the spirit to reside in the statue. This is done by ritual chanting of the Hnun Taat See katha (mantra for inducing the Four Elements – Earth; Fire; Water; Wind: NA MA PA TA; MA PA TA NA; PA TA NA MA; TA NA MA PA). During the ritual ceremony there will be also drawn an special yantra of Guman Thong Dudsap that depicts a placenta as food for the spirit. When the spirit has come to reside in the statue it will be tied to the statue, using the red colored saisin (chanting cord). Then the statue – the new body of the spirit – is soaked in Nam Man Prai to increase its power.

There are strict rules to follow for those who want to adopt a Guman Thong as their child and welcome the spirit to its new place of residence. The new owner needs to inform others (both family members and nearby dwelling spirits) about the coming of a new family member. The first time the owner takes the Guman Thong to its new home there is a special katha (mantra) to be chanted in order to invite the spirit to its new home and is introduced to its new owner and his/her family members. The owner also applies this katha in order to give the Guman Thong its new name (if the owner  wishes to do so, for it this is not strictly necessary).  Further, the owner is required to chant the katha for offering food and drinks on a daily basis.

The origin of the making of Tuyul effigies in Java is derived from the Malay ‘Toyol‘ tradition, which, in turn, goes back to ancient animist traditions of Siam (present day Thailand). In Thailand, tuyul, or toyol child spirits are called ‘Guman Thong‘. The Thai word ‘guman‘ derives from the Pāḷi word ‘kumāra‘, which means ‘young boy’ (whereas ‘kumārī‘ means ‘young girl’). The Thai word ‘thong‘ means ‘golden’, for the effigies were covered in gold leaf.

According to several literary sources that have been passed on for many generations, the traditional method of making a Toyol effigy required the body from a baby who died whilst still in the mother’s womb. The dead baby body, then, had to be surgically removed from the mother’s dead body – a process which had to be performed in a cemetery. The ritual had to be performed at night and completed before dawn. Next, the dead body of the baby, as part of the ritual, had to be roasted in a fire until all fat and skin from the body burnt, leaving only a dry corpse. The maker of the effigy would then paint it with a kind of lacquer (and additionally the effigy will be covered in gold leaf, like they do in Thailand). In this way, then, the maker would adopt the stillborn baby as his own child.

In contemporary Thailand, the government prohibited the practice of making Guman Thong effigies since a long time ago, which, over time, lead to many adaptations of the tradition. However, the making of Toyol effigies no longer requires the usage of dead baby bodies, for these could be replaced by other materials, such as clay from seven cemetery soils, special kinds of wood and metal. The spirit of the dead baby is then ritually invoked through recitation of specific formulas (mantras) which will invite the spirit of the dead baby to reside in the effigy.

Although the usage of different materials have changed the traditional method of making a Toyol effigy, the traditional method of worship has remained the same: the effigy should be taken care of like one’s own child, which means he should be offered food and drinks on a regular daily basis, and also he should be given rewards (through dedication/transfer of merit and material gifts like small toys, etc.) for his help and protection. Toyols are known to be good helpers and protectors of his worshipper and his house, as well as taking care of his worshipper’s financial wealth.