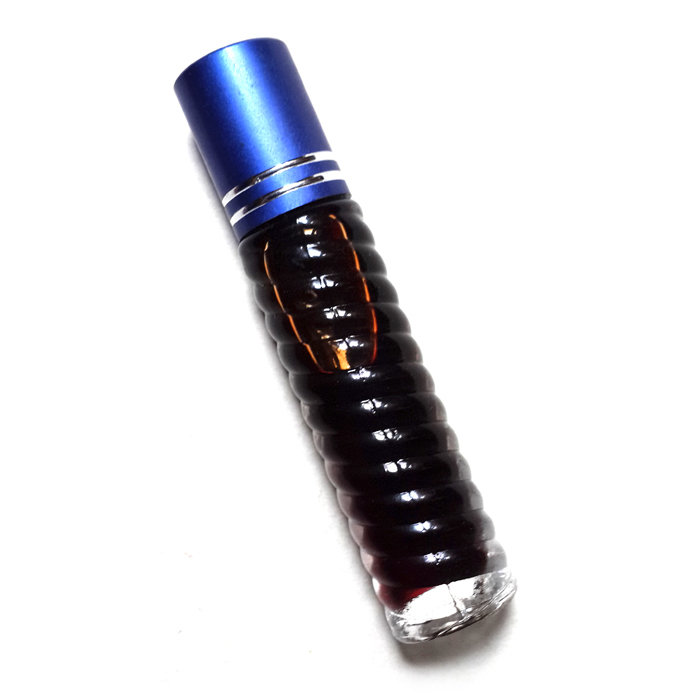 The mystical black oil is an extremely potent concoction of amber, musk, sandal rose and agarwood. Due to the superior quality of essential oils contained within this concoction, it is not only intensely fragrant but also immensely powerful in regard to its mystical properties. Indeed, the purity of the natural ingredients turns it into a magic potion of the highest standard. Moreover, each of the oils in this sacred mixture has remarkably strong magical qualities in and of itself. Hence, when multiple oils of this kind are combined in a single potion, one can be sure that the resultant liquid mixture is classed among the most desirable amulets in Indonesia.

Thus, this Indonesian amulet comes in the form of an occult bottle, which is filled with a traditional brew of magical oils. The amber oil was extracted from petrified wood by a dukun (shaman) from Sumatra. The musk oil comes from a Javan deer, and the sandal rose and agarwood oil was obtained during the shaman's pilgrimage to Mecca, Saudi Arabia. In order to enhance the concoction's metaphysical powers the dukun also performed a consecration ritual, chanting ancient incantations of Indonesian mystical tradition in combination with Islamic spells.

In this way, the consecrated potion is permeated with virtuous blessings by a true expert of ritual magic. As such, the mystical black oil concoction is endowed with various qualities, like evasion of danger, job promotion, wage increase, credibility, and influential speech. When used as a perfume, however, its fragrance is capable of promoting romantic seduction through enhanced attraction. It is therefore also a love potion which can be used for enchantment and fascination.