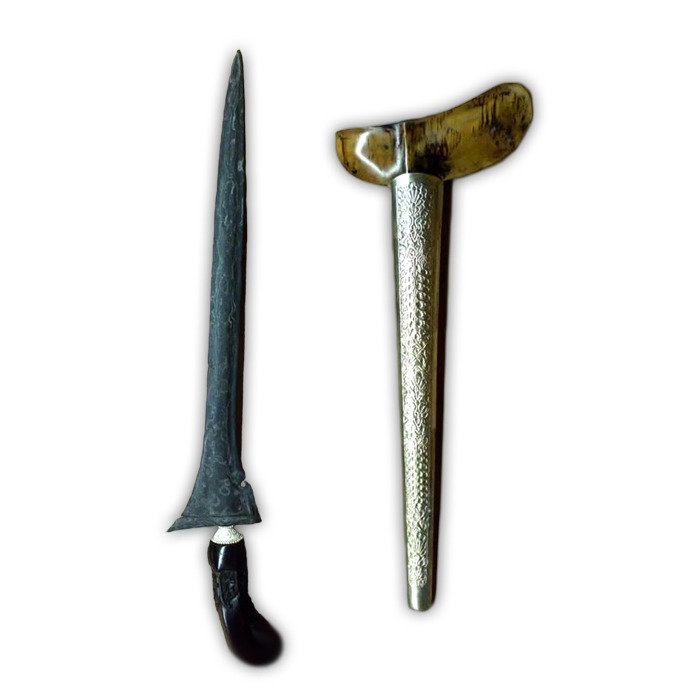 The dapur of this antique Indonesian keris features the straight-bladed Laler Mengeng model. It is a very rare and unique type of keris in regard to the ricikan components of the blade. First of all, the gandik is quite tall, but what is more surprising is the inverted kembang kacang, which points inward instead of outward. Also, due to the absence of ada-ada, the blade appears rather flat. With a total length of 33.5 centimeters, the blade of the Laler Mengeng dapur has an average measurement for an Indonesian keris.

The keris Laler Mengeng contains the elegant Jung Isi Dunya pamor pattern. The pamor motif is spread across the entire length of the blade, covering the exterior surface of the blade from the base to the tip. This particular type of pamor consists of thin layers of circles or bubbles, which look similar to the Wos Wutah and the Kulit Semangka pamor motifs. However, the Jung Isi Dunya pattern stands out from the two aforementioned types of pamor, because it features a unique variation in its design.

This ancient pusaka heirloom keris comes with a scabbard made from Timåhå wood. The wooden warangka sheath is shaped in the traditional gayaman style of Yogyakarta. In addition, the sheath is covered with a silver pendok (cover). For the rest, the hand-carved hilt of the keris also has a silver mendak (ring).