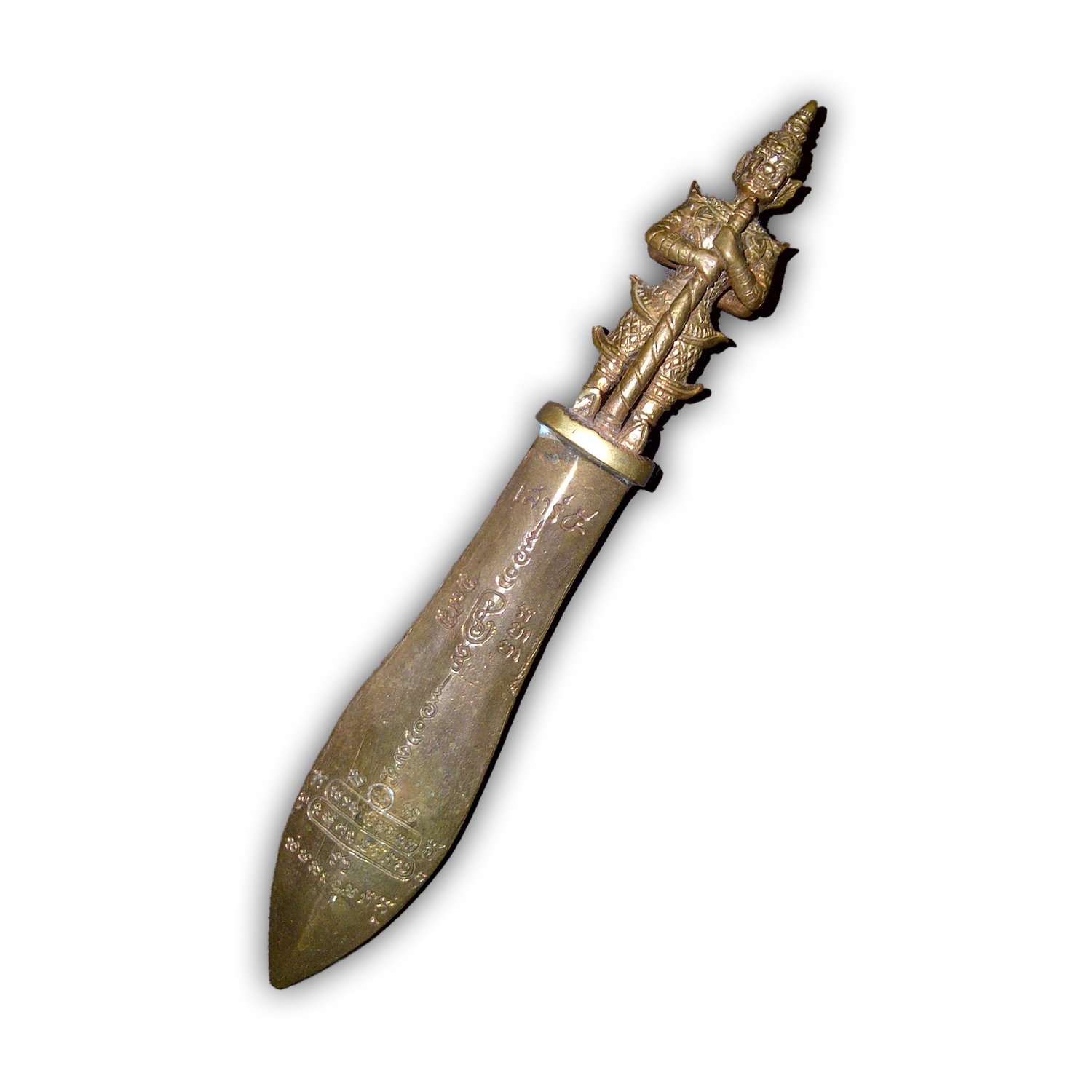 On one side of the handle Thao Wessuwan is depicted as a Heavenly Deity, while on the other side he is depicted as the Asura King. The blade of the knife is inscribed with sacred yant.

LP Jeud consecrated this Phra Khan Thep Satra Thao Wessuwan for 9 months and 9 days (also refered to as "dee nog"). During this long process LP Jeud invited the spirit of Thao Wessuwan, as well as those of LP Jeud's masters, to join the blessing ceremony in order to increase the magical power of this extraordinary item.

There are many ways in which Phra Khan Thep Satra Thao Wessuwan can be of benefit to its worshipper, such as the making of holy water, protection against various venomous animals, black magic, harmful ghosts and spirits, and treatment of physical pains (abscess etc.).


Kata will be provided upon purchase of this item.

- Dhataraṭṭha (Pāḷi; Sanskrit: Dhṛtarāṣṭra) is the Guardian King of the East;

- Virūḷhaka (Pāḷi; Sanskrit: Virūḍhaka) is the Guardian King of the South;

- Virūpakkha (Pāḷi; Sanskrit: Virūpākṣa) is the Guardian King of the West.

The name ‘Vessavaṇa‘ is believed to derrive from a particular region (Pāḷi: Visāṇa) located in the Northern Quarter of the Universe. In this Northern Quarter there is a city called Ālakamandā (which in Pāḷi can also mean “wealth”) where Vessavaṇa and his yakkha (Pāḷi; Sanskrit: yakṣa; Indonesia: raksasa) attendants live.

The name ‘Kuvera‘ comes from one of Vessavaṇa‘s past lives in which he was a wealthy Brahmin mill-owner. During that particular life time he developed his practice of generosity by giving large quantities of food produced in his mill to poor people, and by offering alms to the monastic community of monks (Pāḷi: saṅgha; Sanskrit: saṃgha). As a result of the kamma (Pāḷi; Sanskrit: karma) he had acquired from practicing generosity Vessavaṇa was reborn in the Cātummahārājikā Heaven.

At a later stage of his life time in the Cātummahārājikā Heaven Siddhattha Gotama (Pāḷi; Sanskrit: Siddhārtha Gautama) was born in the world. Soon after that Vessavaṇa would become  a follower of the Buddha; practicing the Buddha’s teachings Vessavaṇa realized the first stage - sotāpanna (Pāḷi; Sanskrit: ṥrotāpanna) – on the path leading to Awakening.

Vessavaṇa often travelled between the realms of the universe to deliver messages from the gods to the Buddha and his disciples in order to protect them. One time he offered the Protective Āṭānāṭā verses – an early form of paritta recitation chants – to the Buddha, which could be recited by the Buddha’s disciples to protect them from yakkhas and spirits when they are meditating in the forest. For this reason people in the time of early Buddhism would worship Vessavaṇa at shrines in the form of trees in the forest.