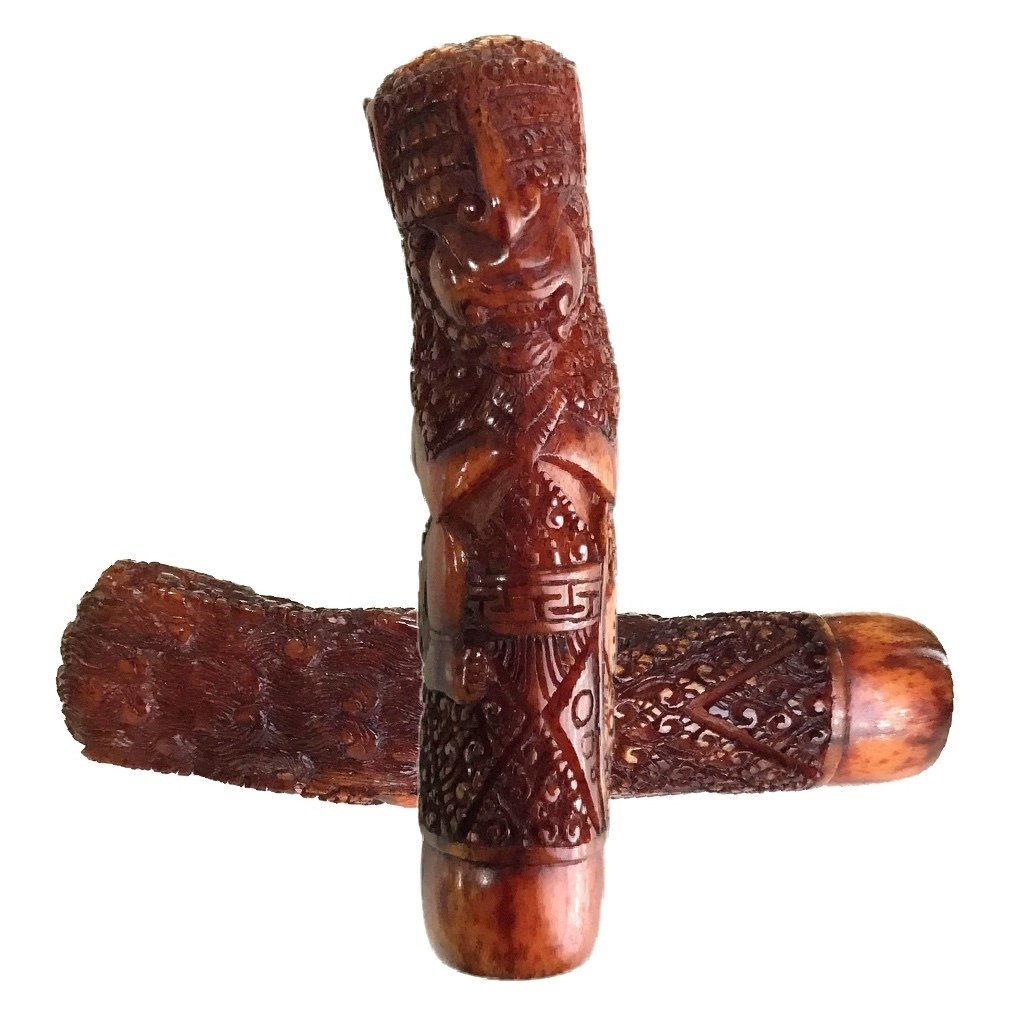 Bhūtas are the demonic creatures of the underworld. In Bali, however, nature spirits and demigods are often equated to the bhūta as well. In Balinese folklore they are portrayed as hungry ghosts and wandering spirits. Yet not all of them are evil, for indeed, there are also many benevolent ones among them. Therefore, it is probably more appropriate to use the term 'daemon' in order to avoid the negative connotations of the word 'demon' as it is understood by most people in the West today.

Owing to sympathetic magic, several beliefs regarding the properties of deer antlers have evolved in the mystical tradition of Indonesia. These traditional folk beliefs are based on the principle of correspondence, meaning that the carved antler yields magical power which is based on the relationship to this animal as described in Balinese folklore. Also, considering that the deer mainly uses his antlers for the purpose of sexual attraction, and as a weapon in fights, we can see how its practical function resembles the demoniac qualities of the bhūta.

Based on the color and condition of the hilt, it is evident that we are dealing with a fine piece of art of considerable age here. Furthermore, its size is another indication of its age, because antique kerises from Bali usually have much smaller attributes (e.g., sheath, hilt) than most newer models do. The carving has been done by hand, giving the handle an extraordinary level of detail in design. Beautiful decoration patterns run across the entire back of the figurine (see image below) and along both sides of the base. Other important characteristic features of the bhūta are its unruly haircut, large fangs, a big nose and pointy ears.

However, the design of the head and face of this particular danganan image is rather abstract, as can be seen in the image below. This suggests that it must have been made after the early sixteenth century when conventional Hindu iconography started to change due to the spread of Islam in Java, though probably still somewhere before the late eighteenth or early nineteenth century as Balinese kerises of the time did not yet have with the big and heavy blades, sheaths, and hilts which they would become so famous for in later times.

Generally, people in Indonesia, especially in Bali and Lombok, not only acknowledge the existence of bhūtas, but they also firmly believe that these supernatural beings have the ability to either help or harm human beings by the virtue of psychic powers. It is said that they work against people who are predominantly controlled by selfish desires, being driven by anger and greed. But people who faithfully include the bhūtas in their prayers, and occasionally give offerings to them, those are the ones who can expect numerous boons in return for doing such praiseworthy deeds of generosity. Hence, if a person wants to be successful in life and make sure that his or her success lasts a lifetime, then s/he should perform proper pūjā (worship) to the bhūta. This form of worship can be carried out by means of chanting the mantra below. The mantra may be followed by making a special wish concerning the things one needs help with, like love, attraction, social status, power, authority, charisma, fame, or simply money.

Mantra for offering Pūjā to the Bhūta

(I always pay homage to all the bhūtas who may have a liking for offerings).